I’m A Single Mom. My Son And I Are Enough

Sometimes when I feel like I don’t belong, I remember, no, I belong to him.
Adrienne Gunn
Uncategorized 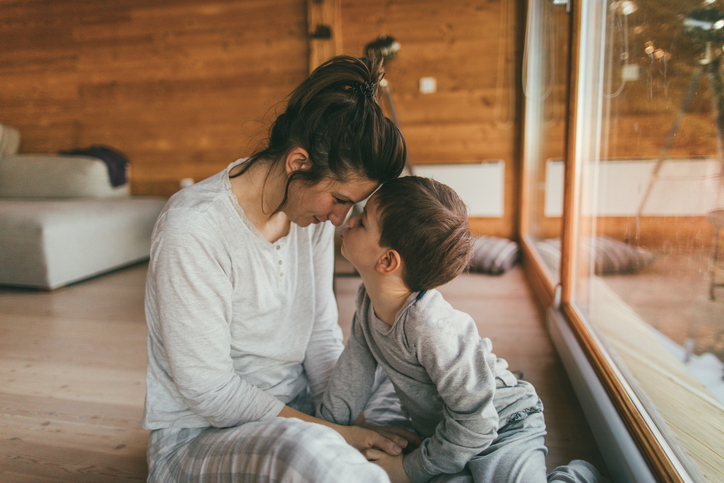 In the weeks leading up to my son Max’s fifth birthday he invented an imaginary place called Giant Land. I don’t know where it came from, but one day Giant Land appeared and hung over our heads, way way high above the clouds, almost to space.

Max would tell me about Giant Land while I was buttering his toast or rushing him to put on his shoes and I’d listen as he pushed past the boundaries of our apartment on Claremont Street and into all sorts of fantastic possibilities. His Giant Mom liked to meditate and his Giant Dad worked on researching humans. There were two-headed horses in Giant Land. You don’t need to wear a swimsuit at the beach in Giant Land. “Mom,” he said seriously on the way to school. “I’m allowed to say ‘shit’ in Giant Land.”

Finally on the morning of his fifth birthday he told me his birth story. His real birth story.

“Do you know how I came down from Giant Land?” he asks.

“The giants dropped me down from the sky and you found me in the grass and took me home. And when I fell from the skies I shrank because I came down too fast.”

I like this story. In reality, the day I found out I was pregnant, my husband pissed himself at a bar. He was 30 years old, on a business trip, and apparently having a great time. The day I gave birth, he did nothing like the husbands in the movies do, no ice chips, no back rubs, no cool cloths, no good jobs, and in the middle of the night I kept the TV on because I’d rather watch the Golden Girls than acknowledge how scared and desperate I felt. We’d been together since I was 20, and now I was 29, living across the country from my closest family and friends, with a husband who was either depressed, or unpredictable and wild, and now with this little baby. I kept my mouth shut about the yelling and the meanness because as long as no one knew, there was still this small chance that it could all be perfect.

And then I was alone. Alone with this baby. My parents were a plane ride away. My friends back home didn’t really understand what had happened. I had to rely on people I didn’t know very well, people who so far I’d given very little of my true self to; I had to be gapingly broken and ask them for help – help me move, help me with this baby, just help me. I asked them to share with me his first steps, his first birthday, and they did those things, and I will never forget those kindnesses. But I was alone and every time the baby did something cute or funny, I saw it, but that person, that other person I was supposed to share those moments with, who I thought was supposed to give them significance, was gone.

One night I sat in the carport smoking cigarettes and listening to the baby cry. He would not stop crying. He would not go to sleep. I’d done everything I could think of to do, and my nerves were frayed, I was nothing. All I could do was sit there and smoke and listen to Max cry.

I vowed to be stronger.

“When I’m 27 I will have to go back to Giant Land,” Max says as we lie side by side in his bed, the last lines of the Biggest Cookie in the World still floating in the air around us.

“Maybe you can come.”

I kiss his forehead, turn out the light, and say goodnight. In the dark he says, “Mommy, in Giant Land my mom and dad are married and they love each other and they kiss,” and it was like a shot to the heart because I wanted to give this child everything, I wanted him to have everything, I did, but what I felt was relief – overwhelming relief, still all these years later. And gratitude that our home was a peaceful place with laughing and hugs and one orange cat named Richard.

I tried not to be too concerned, upset, sad, worried, that he’d created this parallel family, who are so much bigger than I am, who all live together, and who somehow make him feel safe. I tried not to worry about why he needed them, why he made them up, if I’m doing any of this right.

For a while I’d secretly hoped that I would meet someone else, get remarried, sneak this new man in under Max’s radar, have another baby – poof, like it never happened. Max would still have his dad of course, but we’d also have a house with a mom and a dad and two kids and family dinners and game nights and Christmases with everyone around the tree. And when that didn’t happen I was so angry with myself that I’d chosen wrong at the beginning — that because I’d chosen this man, I’d eliminated all these other choices, nice men who would’ve been kind to me, who would’ve appreciated the things about me that I appreciate about myself, and now here I was, 36, with the dream of having a traditional family – even though my previous “traditional family” made me miserable – slipping further and further away.

Maybe it’s just a fact of my life, but still, telling someone I’m a single mom makes me feel like they can see there’s something wrong with me. That I wasn’t wanted, or that I wasn’t good enough, or that it was all fucked up, and well, of course it was because I’m damaged and fucked up. So I’ve tried to be perfect. I’ve bought anti-aging lotions and made smart, responsible decisions, and looked for love, and down-played how important motherhood is to me, and tried to talk about my divorce breezily – oh, it just didn’t work out, we married young, we get along great, he’s a good co-parent, ha ha, shit happens. But with time, I’ve learned to stop and ask myself, what is lost to us now? Truly lost? Isn’t it just one version of how things could be?

But there are still all these other versions.

I think about Max’s Giant Land birth story, about how beautiful it is in its simplicity, about how it mingles with centuries of stories about how any of us came to be – just dropped from the sky – and in a sense how it is sort of like that, we land somewhere, to someone, and we don’t really know why. He has rumpled hair and beautiful skin and crooked teeth and says hilarious things like “Mom, tomorrow I need to take my finest Legos to school,” and I like that even in Giant Land we were fated to be together.

Every day he makes me smile and laugh. He still likes to hold my hand. When I hug him now, he doesn’t feel so much like a little kid, but like a little person. And sometimes when I feel like I don’t belong, I remember, no, I belong to him. He sleeps now holding a stuffed shark we bought at an aquarium when he was 2. This is what a life is, I think. It’s nothing like what you think it will be, but this is it, and it’s enough.

He will grow older, I will grow older, and I will write down these stories so when he wants to know who I was then, he can take them down from a high shelf, dust them off, and we will greet each other again in this moment. He will have forgiven me my mistakes because he’s a kind man, maybe even with children of his own, and he knows that parenting takes guts — it’s sticky and messy and imperfect and he’ll be knotted up by the love and the worry and the weight of it all and he’ll want to know how to get through it.

This is it, I’ll say. This is what a life is. You try your best and hope for the best, just dropped from the sky. And you move forward. Imperfectly together.