Q&A With Nefertiti Austin, Author Of ‘Motherhood So White’ 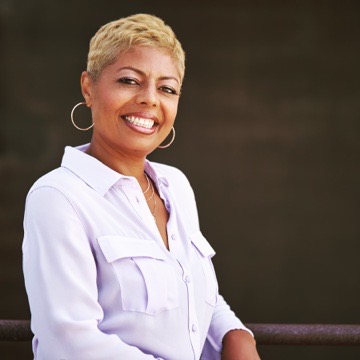 When Nefertiti Austin, a single black woman, decided to adopt a black baby boy out of the foster care system, people asked her why she wanted to adopt a “crack baby” or said that she would never be able to raise a black son on her own. She quickly realized that American society saw motherhood through a white lens, and that there would be no easy understanding or acceptance of the kind of family she hoped to build.

In her new book, Motherhood So White: A Memoir of Race, Gender, and Parenting in America, Austin tells the story of creating the family she always knew she was meant to have and the struggles she faced to get there. Today, she is the proud mother of two adopted children, her son August, 12, and daughter Cherish, 6.

We, of course, wanted to know all about her journey to motherhood and how she navigated the adoption system as a single, black woman. So we spoke with her about the history of adoption in the black community, stereotypes of single, black mothers, and how she ensures that her children are surrounded by love and support.

Tell us about your decision to adopt a black boy out of the foster care system.

It was natural for me. My best friend was adopted, and my brother and I were raised by our grandparents, so I knew how it felt to be raised by someone who didn’t give birth to you.

In my mid-30s, when I was ready to become a mother, I wanted to go the “traditional route,” but I wasn’t in a serious relationship, and the idea of adopting just kept pushing itself to the foreground.

I was also aware that black boys were the least likely to be adopted. Because of racist stereotypes, these boys are expected to grow up and become the worst element of society. I didn’t like that narrative and felt like I could do something about that. I recognized the importance of intervention in someone’s life. I knew I could prove those stereotypes wrong.

For those who haven’t been paying attention: What stereotypes do single, black mothers face in this country?

There’s this notion that a single, black mom is a welfare recipient. She is poor, her kids will be poor, less educated and will become just more people the state has to take care of. But that’s simply not true. There are so many single-parent households across racial lines. But black women are given the sad dishonor of being attached to the welfare system.

In your book, you discuss the history of adoption in the black community. Can you tell us a little about that?

The “black adoption” is when the elders of the family take over the parenting roles for their grandchildren, whose parents are struggling to be self-sufficient. They might also “adopt” a child from a family member who’s single or very young. There’s no court. No social workers. No paperwork other than guardianship forms, which are easy to fill out. Typically, we don’t want to go through the legal system, we don’t want to get anyone who’s struggling in trouble.

You talk about how you built a support system of male role models for your son after you adopted him. What did that look like?

I built an incredibly supportive male community. I enlisted the support of a lot of black male friends at different stages in their lives, some retirees, some single dads, some childfree men, and more – who could provide advice to me and guidance to my son. All we want is for these kids to be happy. I provide my son with tons of opportunities, but they can provide different ones and different perspectives.

What, mostly, do you want folks to take away from your book?

For black mothers, I want them to see themselves on the page. It’s important that we see ourselves in parenting narratives. It was the book I wish I had. It’s my story, but there are enough cultural similarities that it could be a great resource for anyone.

And for white folks, I want them to see how many similarities we have. We’re more alike than we are different. But culturally, black women parent from a space of fear. We still worry that when our children are out, that our kids won’t come home. We worry that our kids experience unconscious bias because the white teacher sees a black boy laughing loudly as a disruption, not just a joyful little boy. I want white women to make friendships with black mothers – we can talk about potty training, health insurance, sleepless nights, all of it. We’re in it together.

The most universal thing ever is the love of a child. That’s for everybody, regardless of race or gender. We have more in common than you think.