After growing up with seven siblings who were adopted into the family and one sibling who was biologically connected to my parents, I recognize that society places a higher value on children born biologically than those who are adopted.
Angela Tucker
Uncategorized 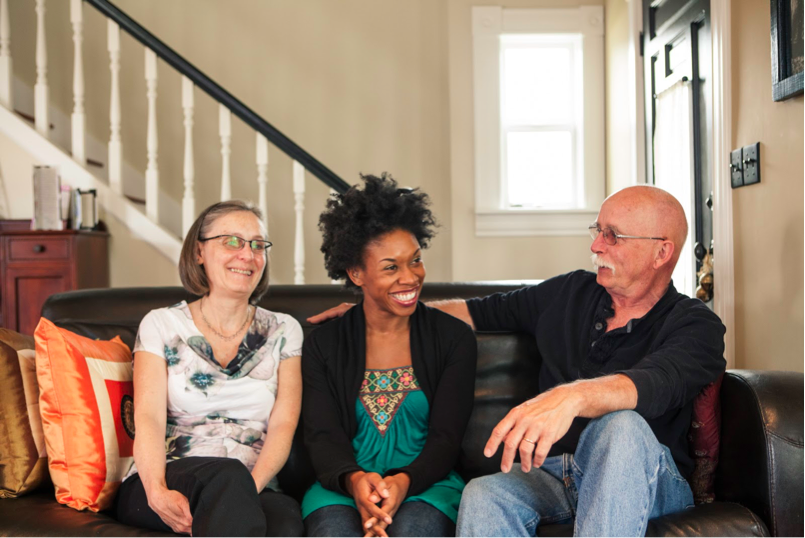 “I want to adopt, but I’m going to have biological kids first.” Have you heard anyone say that? Or have you said it? It’s a common phrase that people say without putting much thought into. But as an adoptee myself, the idea of “biological first” carries a great deal of weight – and even pain.

When people say “I’m going to have bio kids first,” it prioritizes having “your own” – as though adoption is a good and charitable thing to do, but it’s just not the same as having biological kids.

For five years, I worked with hundreds of couples hoping to grow their family through adoption. The initial conversations included explanations of their motivation to adopt, for which I heard a similar story almost every time. They talked about their painful journey to my office, which included unsuccessful IVF bouts followed by the heartbreaking decision to move forward with adoption. The tearful statements were often followed up by an eager admittance that they hoped to be one of the lucky couples that gets pregnant right after adopting a child. I never had the courage to tell them that this is an old wives’ tale.

Through these experiences, as well as growing up with seven siblings who were adopted into the family and one sibling who was biologically connected to my parents, I recognize that society places a higher value on children born biologically than those who are adopted.

And yet, I’ve heard countless adoptive parents say the opposite when talking about their biological and adopted kids: “They’re all my own!” they insist emphatically.

That’s what my parents say, too — and I believe them. I know they love all their (adopted) children as much as their biological daughter. I know they want what was best for each of us in our own unique way. However, I also know that in response to their biological daughter stating that she wasn’t planning to have any biological kids, my dad uttered, “Welp, the family line stops here.” I think it was a Freudian Slip. And it stung. But I know he didn’t mean it the way I heard it.

I heard this: The beautiful blue eyes, the high intellect, and the perfectly symmetrical faces will stop. I think he felt a bit of sadness that his bloodline may end there.

All my life, I heard people exclaim to my dad, “Isn’t it wonderful your daughter got your beautiful blue eyes?” To which he would respond, “Yup, they sure are pretty. And Angela got her love of reading from her mom.” My parents’ desire to make us all feel included was effortless. I knew I belonged in my adopted family and relished in those non-genetic comparisons. I clung to them.

So it was pretty obvious that as a child and teenager I supported the nurture side of the nature vs. nurture debate. Nurture has to be more important, I reasoned, even though the envy I felt for my sister’s similarities with our parents was unmistakable. My origin-less brown eyes watched this scene play out time and time again over the years. Amid the pangs of jealousy, I wondered who I resembled in my biological family and if I would ever have the good fortune of hearing such a comment.

As I reached adolescence, the desire to know my roots deepened and the chorus of “Oh, those piercing blue eyes are stunning!” seemed nearly constant. I could hear it every time I closed my eyes. And every time I looked in the mirror. I desperately wanted to be the recipient of that statement.

It’s interesting to me that, in adulthood, I have drifted over to the nature side of the debate. I now hear “I want to adopt, but I think I’ll have biological kids first” as a declaration that passing along your DNA is of the utmost importance. When I hear this statement, my dad’s mistaken utterance replays in my mind and I have begun to feel that there is something innate about the statements comparing physical traits to each other. Adoption is and will always be a necessary solution to an unfortunate need. It is in this vein that I cling to Kahlil Gibran’s poem “On Children” as a strategy toward decreasing the “otherness” that is so easily felt when surrounded by people whose traits match.

Your children are not your children.
They are the sons and daughters of Life’s longing for itself.
They come through you but not from you,
And though they are with you yet they belong not to you.
You may strive to be like them,
but seek not to make them like you.
For life goes not backward nor tarries with yesterday.

I posted this quote on my office door hoping that prospective adoptive couples would absorb the message by osmosis, but it didn’t seem to work. Conversations of a similar vein continued; “Is it possible to make sure our child’s birth parents don’t name the child? We already have a name picked out: ‘Alma,’ it’s my grandmothers’ name.” The desire to claim ownership of a child is so strong.

At the age of 26, I found my biological family. I was finally able to learn that my biological parents are both right-handed, my birth father has a dimple, and everyone in my birth family has brown eyes, 4c hair texture, and dark skin. Even though we’d only known of each other for a few hours, I had to work to refrain from asking about genetically impacted markers like “Achoo Syndrome” (a dominant trait also called photo sneeze reflex), or “hand clasping” (learning which thumb one automatically places on top of the other when clasping hands together). It was the DNA connection I’d longed for for so long!

And yet, as I gazed into my birthdad’s large brown eyes and marveled at the miracle of finally seeing someone I resemble, I found myself secretly wishing his eyes were blue. I realized that those bright blue eyes, so dissimilar from mine, had become home. They’d become love and comfort and shared history. My deep brown eyes look just like my birthdad’s and I’m so grateful to share them. At the same time, those beautiful blue eyes are my home.

Dear White Family, Now That You’ve Stepped Up, Will You Stay Up?
When BIPOC Kids Are Excluded At School
Does Your Blended Family Look Like The Brady Bunch? Mine Doesn’t Either.
Grandparenting During COVID-19: I Gave Up My Social Life For My Family And I Have Zero Regrets
view more